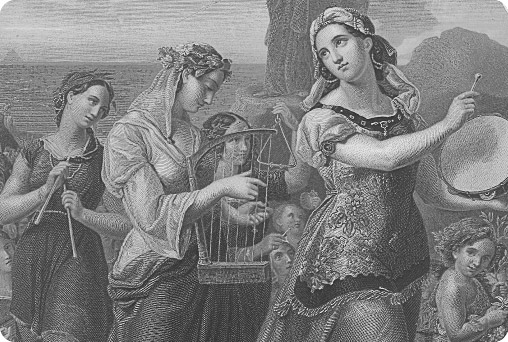 The title of the programme refers to the song mentioned in the Thora, that was sung by Mirjam at the sea. One of the oldest documented examples of female musical creativity in history. Referring to that, the Berlin artist Wilhelm Hensel has portrayed his wife, the composer Fanny Hensel (maiden name Mendelssohn) as Mirjam in the 19th century.

The programme “Song of Mirjam” consists of works created by Jewish woman composers, among them Helene Liebmann, Fanny Hensel (maiden name Mendelssohn), Minna Keal, Vally Weigl, Lena Stein-Schneider and Sarah Feigin. Each name is connected with a dramatic fate and an outstanding musical creation, that has been, with small exceptions, unknown to the musical public. After long years of research in the music libraries and archieves in Europe and the USA, we have worked on a unique programme, which represents a special chapter of Jewish and European musical and historical history.

In 2009, our CD was published with the programme´s recordings at Zuk Records International. We plan to publish another edition having the same title, at Furore Verlag Kassel in the year 2011. This project was supported by the Ministery President of Schleswig-Holstein, by the city Bargteheide, by the Foundation “Zurückgeben Berlin” and the Brunswik Foundation Kiel.

Through the moderation, the audience can grasp an idea of the artist´s biographies.